When they take the census out at Lightning Ridge, the forms are distributed as they are everywhere else in the wide brown land that is Australia. They even arrive at a figure, though you wouldn’t want to put much store in it. There are always those who’d rather not be found and there’s more than a few of these out in the Black Opal fields of the charismatically quirky town up near the Queensland border. As the quite formal sign on the outskirts declares, almost proudly: Lightning Ridge Population ?

Over the years, they’ve come to make their fortune; drifted in and drifted out, set up camps and convoluted constructions, dug deep, altered the landscape, run themselves ragged, told tales, generated some themselves, and abided by few dictums apart from their own. There’s been names on mining leases more likely to be found inscribed on a collar than entered on a birth certificate. That’s when there’s actually been mining leases.

All frontier towns celebrate their outlaws and outcasts and on the Ridge, where it seems everyone’s a blow-in – you don’t get born there, you just show up one day and maybe stick around – there’s far less mention of ocker actor Paul Hogan (who was actually born there) than of the infamous One Bucket Bob from down south who scooped up a million bucks worth of opal in his first scoop then, when he’d squandered it foolishly (is there any other way?) came back to town and did the same thing again.

If he’s mythical then I suppose the tourist who plucked a twenty grand stone out of a slag pile outside the Visitors Centre is as well but, the longer you’re in town, the more credence you’re inclined to give the legend and lore of the place. Indeed you’re inclined to wonder just what hasn’t been handed down in a community that keeps much of its business close to its chest. As one long-term resident said of the opal rush that exploded in the early 1900s and put the town on the map: “People came here to disappear. You rarely knew anybody’s name, and those names you knew were probably fake nicknames in any case. You didn’t ask much about somebody, and they didn’t tell too much either.”

It was where they came from that had particular impact on the tone of the settlement, which was named after a shepherd who had most of his flock wiped out by a lightning strike one tempestuous night. Not just from all around the wide brown land but parts of old Europe much given to ancient tales and mythology. Today, the biggest church in town is the Serbian Orthodox of St. George and unquestionably the most compelling structure is an unfinished astronomer’s castle, with walls crammed with diagrams and verse. Many of the miners who left their mark so indelibly upon Lightning Ridge were learned, curious souls who found it difficult to exist in too close a proximity to others. They would have been hermits wherever they ended up. As you can read in your Lonely Planet guide: “The streets are trodden by eccentric artisans, true-blue bushies and the general unconventional collective. And that’s all ridgy-didge in the Ridge.”

Equidistant from Sydney and Brisbane – about 750 kilometres to both (with Dubbo, more than 350 kilometres away, the closest “big smoke”) – Lightning Ridge is not really in the trajectory of anywhere in particular, except perhaps the sleepy little outpost of Walgett, the shire’s seat. As a long-time resident called Christine has put it: “You have to really want to come here. We aren’t on the way to or from anywhere and we’re a full day’s drive from the nearest major airport. Even a quick visit can take days of travelling each way. Not a lot of people have that kind of time these days.”

And when you do arrive, the bush panorama you have been accustomed to for so very long seems to belong to someplace else again. What greets you is a haphazard landscape, or a sci-fi moonscape, almost Dali-esque.  One description has been a post-apocalyptic Mad Max junkyard. But there is more sense to it than is initially apparent. It’s a terrain scattered with Day of the Triffids-type contraptions, no two seemingly alike. Very little seems purpose-built, with some clumsy devices adapted from the drive shafts of old flat-bed trucks and pick-ups. You see, a registered vehicle isn’t necessary for you to work on your mining claim so, as it has been oft said, many a truck and car comes to the Ridge to not so much die as be reborn for a more dignified life. The role of each is essentially the same – shift soil, filter its contents and tuck it all away somewhere in piles.

The most industrious examples of endeavour are not in Lightning Ridge itself, which has become almost gentrified, with a score of opal shops, a John Murray Art Gallery, modern housing, a large air-conditioned bowling club with artificial-grass bowling greens, a huge Olympic pool complex and an outdoor steaming mineral bath in use even during the 45-plus degree height of summer, but a short drive away at Grawin Field. Here a couple of hundred hardy folk survive, welcoming visitors to their ‘Club In The Scrub’ and ‘Glengarry Hilton’ – watering-holes-cum-community-centres, libraries and internet cafes that seem to have been crafted in classic fiction, or perhaps built for a film set.

It’s out around Grawin that your camera never seems to leave your eye. This is a world dominated by people who feel as comfortable living under the ground than above it, who build Chambers of the Black Hand stacked with surreal subterranean art, who put together houses made from bottles, cans, sheets of iron, old furniture and whatever else comes to hand. You find your way to much of it through an ingenious network of colour-coded and numbered car doors taken from rusting hulks (whose moving parts may well have been otherwise harvested) – a perfect system in an otherwise confusing realm devoid of street names and house numbers. 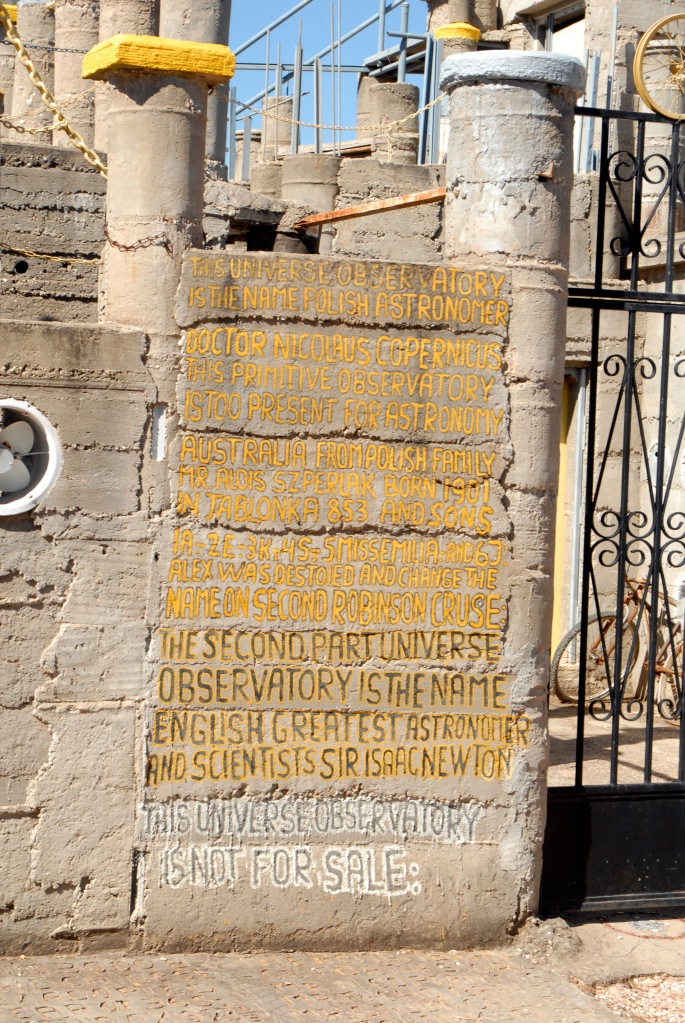 But not devoid of fairly strict codes of conduct. While it has been legal to fossick since 1992 and the large tourist intake residing in caravan parks, camping grounds and motels during the cooler months does just that (with One Bucket Bobs a distant memory), few words are spoken with the dripping disdain or unbridled anger of “ratter” – the unspeakable curs who sneak onto leases and mining sites under cover of darkness and make away with the precious and rare stones. A strong seller in its day was The Ratters of Lightning Ridge, a novel by Richard W. Holmes that touched upon the rich and ribald tales of rough justice that involve deep mine shafts and dynamite.

The opal miners were not the first to scratch hopefully in the dirt, not by a long shot. For this is a land where dinosaurs once roamed. It is a key paleontological site on our ancient continent, with fossils from the Cretaceous period some 110 million years ago occasionally opalised in the sandstone rock that once formed the bottom of a shallow inland sea. The remains of aquatic plants and animals – small creatures living in a world dominated by dinosaurs – add to the treasures beneath the surface, with archaeologists scrabbling away with miners and fossickers.

All told, the place is quirky, whimsical and, for all the tales of shadowy wealth acquisition, friendly and accommodating. Though it’s a haul to get there, an awful lot do, gleefully participating in the “self-drive tours” upon arrival. They’ll follow the green car doors to the end to check out Charlie Nettleton’s first hand-sunk shaft, and they’ll swap notes at night in the Dig In – an outdoor eatery famed for camp oven roasts – about an 18-hole golf course touting dusty brown “greens” and rock-strewn fairways, a cactus nursery with supposedly more cacti on display than anywhere else in our hemisphere, crazy crenulated concrete monuments, Amigo’s Castle, an incomplete observatory, massive Tuscan compound and other monumental constructions said to be a testament to Lightning Ridge’s self-taught architects and builders. If they arrive at Easter, they’ll be out on the sides of the wide Morilla Street cheering on a favourite in the annual Goat Race, where the ornery beasts are harnessed and driven by local kids. If they’ve still got a voice left, they’ll front up the next day for the wheelie bin race and perhaps some more rudimentary competitions involving horses.

You know, that census, when they did take it last, seemed to say that the population of Lightning Ridge was a couple of thousand. Only thing is, traders in the town seem to think they offload enough provisions for twice that, and the wiry citizens certainly don’t look as if they consume significantly more than their fellow countrymen. So, you work it out.