It was that line in Crosby Stills & Nash’s Marrakesh Express about being “under cool Morrocan skies” that marked my expectations. I’d been warned to avoid the train itself but the evening breeze, well, that didn’t seem too much to expect.

And there it was, swirling around Casablanca airport, which is as close to the city of Bogie’n’Bergman, of Rick’s Cafe, as I would get. Dismissed as dreary and corporate by even those who reside there, it seems that Morrocan visitors rarely see it. No sooner are you out of the car park, breeze in your hair, than you’re whipping along a wide motorway to Rabat, just an hour away.

When you think about it, and I did, few relatively small countries have so many cities that can be brought immediately to mind, even by those who may not have been there. Casablanca, Marrakech, Fes, Tangier, Rabat, Melilla all roll off the tongue easily.  It could have something to do with the fact that, since the counter-cultural upheaval of the 1960s, Morocco has loomed large as an exotic destination, a place that you should have found your way to if only to be a bona-fide global citizen. The rock gods of the time, Rolling Stones and Hendrix, came to commune with high-flying traditional musicians and hash sellers and set in train a hippie trail that still exerts a certain pull.

There’s always been something enticing in the proximity of this North African nation, just there on the far side of Gibralter’s rock, sharing the same sea as Spain, France, Italy and Greece. It could be anything you wanted it to be. The Mediterranean at the top, the Sahara at the bottom, the Atlantic on one side, forbidding Algeria on the other. In the middle, magnificent, evocative landscapes that could be in Continental Europe.  Traditional Berber and Islamic on one hand, French-tongued cosmopolitan on the other.

The allure remains potent – a generation of young women now know it as one of the principal locations of the second Sex In The City film. There is yet to be a permanent monument erected to Sarah Jessica Parker and comrades but, when Orson Welles made Othello in the harbour city of Essaouira, the locals honoured him with a park surrounding a bust set in a monument. Sixty years on, it can be said to have seen better days, with his sculptured face splashed with a bucket of wet cement….but, hey, it was initial thought that counted.

Unless you’re heading well north to Tangier, the former International Zone where spies rubbed shoulders with flower children, there is a natural trajectory to be followed from Rabat – inland to Fes then back west and descending south to Marrakech and on to the vigorously sea-swept ports of Essaouira and Agadir, Bouncing up against the magnificent High Atlas and Anti Atlas Mountains, possibly en route to rolling Saharan dunes. Throughout, well lubricated by cups of steaming mint tea, a ceaseless Moroccan motif of medinas (walled cities within cities), souks (tumultuous markets), riads (intimate oasis-type hotels, usually tucked away anonymously down slender passageways) and meals taken at footpath grills out front of butchers providing cuts to order. 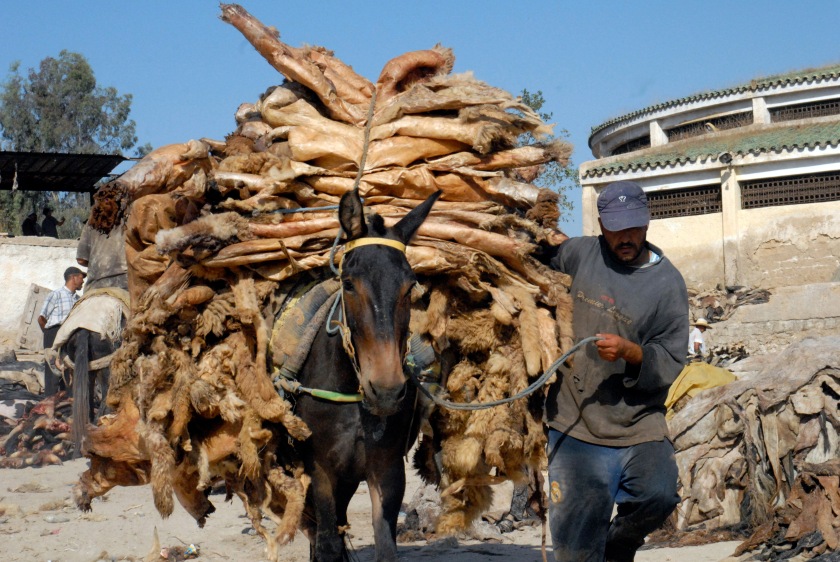 Rabat has all the business bustle of a capital, with major hotel chains and swish offices drawing that end of the market but it’s also where there’s a chance of catching the young king joining locals at outdoor prayers and where, perched atop a cliff with sweeping views of river and ocean, you’ll find the twelfth century Kasbah Les Oudamas, garnished with carved arches that came, along with the tranquil winding streets full of spruce blue and white painted houses, with Muslim immigrants from nearby Spain.

You can let this serve as a mood-setter, an introduction to million-strong Fes, a couple of easy hours’ drive away; though nothing quite prepares you for that 1200-year-old World Heritage-listed maze. Were there nothing else, Fes would be reason alone to go to Morocco. Evoking Jerusalem on one hand and Venice on the other, it is the world’s largest living medieval Islamic city and the largest contiguous car-free urban area. Hurl yourself in one end and presume you’ll eventually come out another all the better for it, having spent time among bakers, donkey handlers, scholars, singers, scribes, confectioners and craftsmen of myriad shade. Minarets alongside satellite dishes. Musicians only just heard above the din of copper beaters. A true feast for the senses.

On a hill outside the old city early in the morning, hide traders pile pelts atop small horses and trundle away. Later in the day, many of these pelts will have found their way to the Chouwara Tanneries, the oldest complex of curing and dying vats in the world. From surrounding vantage points (usually leather shops), you can watch the exacting ancient trade carried on by descendents of its founders. Just as essential a view is the one had from the balcony of the seductive Palais Faraj hotel, a remodeled traditional house of rich traders and power brokers. If breakfast is taken better anywhere else, I did not come upon it.

Marrakech is more brash, more accustomed to (and in some ways less tolerant of) tourists. As modern as it is historical, it has – along with offices, skyscrapers and trendy suburbs with boutiques, gelati bars and expensive apartments – an enveloping, labyrinthine medina, expert padlock and musical instrument makers, universities, and a famous centre square inhabited by snakes, monkeys and their handlers by day and busy food stalls (snails steamed in their shells being one specialty) at night. As everywhere else in Morocco, teeming piles of sweet oranges sit alongside juicing machines and thirsty queues.  Proving almost as popular is Argan oil, ground from local nuts and used – depending on the roasting level – for hair care and bread dipping. On the road to the coast, past trees inhabited by goats (with some assistance from herders), there are Argan factories receiving busloads of visitors, many negotiating for further supplies by mail order. Once, they came for substances you smoked but at least they still come.

One is reminded of the initial enticement in a tiny threadbare village on the outskirts of the Phonecian-originated Essaouira, the most essential destination on the Atlantic seaboard. Though the couple of Hendrix-themed bars would suggest something more grandiose, the late guitarist spent a few days there in 1969, chilling out without a guitar but with a little help from his friends.

While one is inclined to think that it must have been quite a place then, the sea port itself is quite a place now – as picturesque a boat-jammed fishing harbour as you’re likely to find in Africa. Whipped rather energetically by winds that have stopped it from become too overrun by mainstream tourism (Agadir picks up the sun-seekers), Essaouira has a rugged, briney, gritty tone and layered mystique of a once-vital commerce link (between Timbuktu and Europe) and fortified garrison town that has retained much of its charm. Painters ply their trade, flogging their canvases under ramparts still dotted with canons, the one where Welles dangled Iago in a cage over crashing waves in that Othello production all those years ago.

Once a French protectorate, its design is courtesy of the man who laid out Brittany’s Saint-Malo port though beyond the arresting harbour is the ancient array of medina, souk, lazas, cafes and aromatic fish markets that is pure Morocco. Blue is such powerful motif that this may be the only place on the planet where the Coca Cola signage is in that shade. UNESCO plonked the whole thing onto its World Heritage Listing in 2001.

Just as Fes hosts an annual sacred music festival which has offered such performers as Ben Harper and Norah Jones, Essaouira claims two world-renowned music events – the Gnaoua and World Music Festival and the Festival des Andalousies Atlantiques. The bluesy, rhythmic and hypnotic Gnaoua is to Morocco what reggae is to Jamaica and many of the loyal foreign visitors are drawn to Essaouira for its creative streak. My eye caught a Led Zeppelin portrait in the foyer of one of the many richly-appointed but encouragingly inexpensive hotels and riads in the town. Snatches of sound swirled through the winding streets, as did compelling characters inextricably intertwined with the place. As ethereal as it is exotic.

As shrieking seagulls swooped, grills sizzled, artists interpreted and the sun sunk over the walls where a couple of thousand troops once oversaw trade in gold, ivory, salt and feathers for the sake of an orderly empire, there was no small amount of joy once again on my part to be under those cool Moroccan skies.

Glenn flew to Morocco via Abu Dhabi on Etihad Airways. He was exposed to the delights of the country by Morocco By Prior Arrangement.

This article originally appeared in the Autumn 2013 issue of the fabulous Get Up & Go magazine – http://www.getupandgo.com.au

©2014 Glenn A. Baker. May not be copied or republished in any form without permission.