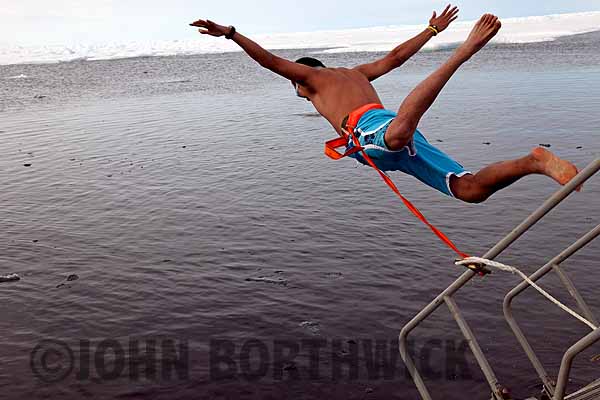 I’m standing at the North Pole in board shorts. The air temperature is well south of zero and there’s a Russian behind me with a machine-gun. Behind him is another with a bottle of vodka. In front of me is an ice-hole. I jump.

Expletive-unfucking-deleted! Take my frozen word for it: polar ice water, at – 1.1 degrees Celsius, stings like the furies, all over. Then you start to go numb, which is a relief. It’s also hypothermia. I burst to the surface, yelping profanities, gather what’s left of my wits and swim back to the “shore” of pack ice. As I clamber out, the Russian with the bottle gives me a big swig of vodka while his mate with the Uzi keeps watch for polar bears.

Playing the ultimate fool at Ultima Thule is, for those who’ve gone gonzo, the climax of a trip to the North Pole. We’ve parked our monster conveyance, the world’s largest nuclear-powered icebreaker, 50 Years of Victory, right at the geographic Pole, 90 degrees North, and dropped the gangplank. A crewman sticks a red pole in the ice to mark “the spot”. After my swim — and now sanely clad in thermal underwear, parka and boots — I stroll around the Pole, thus completing a circumambulation of the world in twenty seconds.

I look up at our massive Russian vessel, seemingly marooned amid a White Limbo icescape that stretches to the horizon. In fact, packing 27,000 horsepower of nuclear grunt, she’s far from stuck, having muscled her way here, 1382 nautical miles from our embarkation point, Murmansk, northern Russia, through dense sea ice. We’re now sitting atop the 2.5-metre thick polar ice cap. Some 4261 metres below us on the sea-bed sits a flag placed by a manned sub in 2007 — Russia’s ambit claim for the Pole and its minerals.

It has taken us five days to reach the Pole, time for the 120 passengers on board to get to know this 75,000 tonne behemoth which spends 10 months of the year keeping open High Arctic shipping lanes between the northern Atlantic and Pacific oceans. We’re in the two-month “summer” (the term is relative) during which the ship takes paying, charter passengers to the Pole. 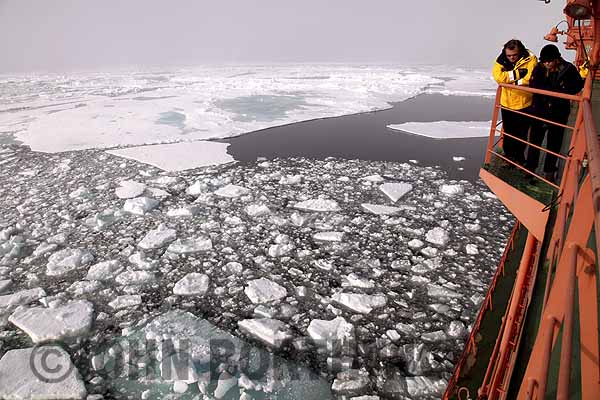 Our day at polar ground zero is about more than having fun with hypothermia. We form a circle around the Pole sign and observe a moment of silent respect for the planet and this shrinking ice cap we stand upon. The kitchen crew then set up tables, benches and a barbecue, with the hot toddies and mulled wine flowing generously. Later we explore this ultimate realm, this lemon granita landscape, where the polar silence sings, ice crystal forests rim pale turquoise pools and a fog-bow arches over the ship’s Martian silhouette.

After this day of awe at the top of the world, will the rest of the cruise be an anticlimax, all downhill, as it were? Far from it. The big ship turns, crunching its way south again through the pack ice — it feels like we’re in a bus driving forever over an unsealed road — while we settle into a semi-routine of meals and naps, plus lectures by our expedition specialists in polar history, glaciology and wildlife. 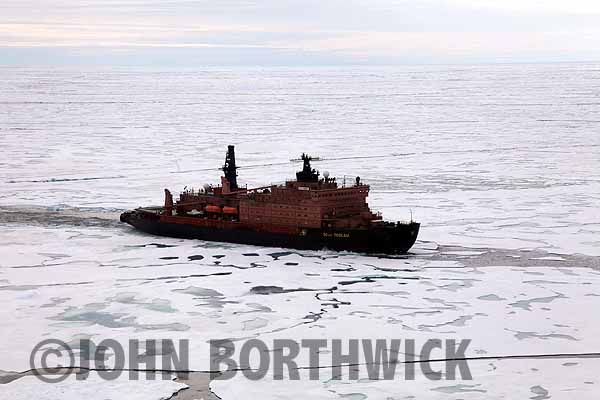 Far below decks we get to inspect the ship’s engine-room, its truck-sized turbines, massive steering gear and nuclear reactor control room. It’s strictly “no photos” in the latter, with beefy Russians of unspecified occupation keeping an ursine, Soviet eye on us. “The ship’s got three, not two, first officers,” notes a passenger. “The third one must be KGB to keep an eye on the other two,” he speculates.

Before I left, friends had joked that I should wear lead-lined undies on this nuclear hot rod. (“She does 22 knots, ’officially’,” says Captain Valentin Davydyants, hinting at somewhat less — or perhaps more? — speed.) One American passenger takes the radiation idea dead seriously and brings his own Geiger counter. To his relief, or disappointment, the only furious clicking we hear is scores of camera shutters during any polar bear or walrus sighting. My friends had also joked that meals would be borscht and cabbage, with yellowcake for dessert. On the contrary, with the catering run by Austrian hoteliers, we sup like minor czars.

I perch at the bow, peering out across an ivory desert, a Lake Eyre in ice. Crazed by fissures and leads, the pack ice parts before the ship’s massive bow to reveal brilliant teal-green waters. The wind-chill up here might be bone-snappingly cold but there’s always a gaggle of passengers watching as the prow cracks through ice sheets like they were the toffee crust on a crème brulée. We’re also scanning for polar bears. “Just look for what seems like dirty ice moving,” says Alaskan Kara Weller, one of our voyage naturalists. Whenever someone spots a polar bear — they are rare this far north — there’s an announcement from the bridge, the ship slows and we rush to the rail like kids at a zoo, with camera shutters in overdrive.

I see four bears during the voyage — supreme, solitary, creatures gliding over the infinite ice, unperturbed by the sudden intrusion into their white-on-white world of a 160-metre long, red-black gargantuan. We track each bear at a distance until it ambles off into the lunar emptiness.

Our twin-berth cabins, normally those of the ship’s officers (who are bumped downstairs during charter season), have en suite bathrooms and blackout curtains. Travelling beneath the midnight sun means for us 12 nights of constant daylight. We might be alerted to a bear or whale sighting at 3 am, or to depart on a helicopter trip at midnight. Add to this the ship’s bar being open till 2 am, or until the last passenger slumps, and our sleep patterns go haywire. “I’m going to bed when it gets dark,” says one woman, absent-mindedly.” “It gets dark in August,” Kara reminds her.

Returning from the Pole, we plough south through the Barents Sea, aiming for the Franz Josef Land archipelago. I have time to consider the eccentrics among our company of 22 different nationalities. There’s the Englishman who wasn’t sure if Russian hospitality yet extended to toilet paper — he brought huge supplies of his own. The girl from New York who did headstands at the Pole. The Russian crewman who dived in but could barely swim. The cashed-up hard partyers from Beijing who observed the ship’s total “No Smoking” policy by lighting up only in their cabins — thus setting off at four a.m. the fire alarm and the Captain’s considerable Russian wrath.

Shackled to the aft deck is a huge MI-8 helicopter that we use for landings and sightseeing. Franz Josef Land appears out of the fog, a monochrome maze of low, dark islands drizzled with glaciers. We pile into the chopper, 14 at a time, and shuttle ashore to Cape Fligley on Rudolf Island, the northernmost point of the Eurasian landmass. Like all 191 of these basalt islands, it is uninhabited. As the sun comes out, we roam across its tundra of lichen, spotting bear tracks, a nesting Eider duck and a lonely wooden Orthodox crucifix facing the Arctic void. Enormous domed glaciers slump off the island’s flanks but are off-limits for hiking because of bears. 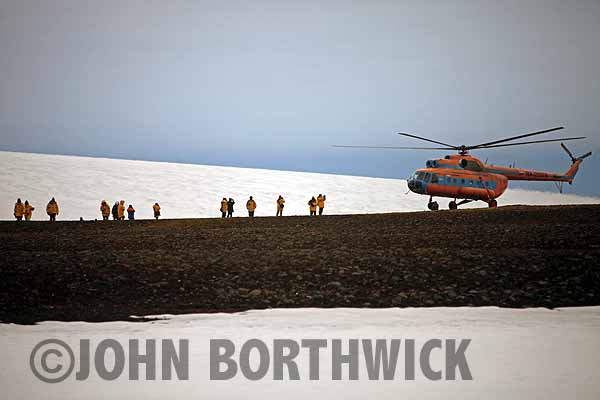 Next day we weave through the island maze, down the Markham Strait to another landing at Champ Island. Time for a serious hike but always with a machine-gun man not far away. We clamber up a steep scree and into birdland — hills where thousands of auks, black-legged kittiwakes and glaucous gulls wheel and cry, sending our considerable pack of birders into their own exclamatory raptures.

Cape Tegetthof on Hall Island, a place of bleak and gothic beauty, is (as Tom Waits would say) “colder than a well-digger’s ass”. We find the remnants of an 1899 expedition hut that echo a time when this shore was at the extreme limits of the human reach. Beyond here was so forbidding that it wasn’t until 1948 that the first person stood at the Pole — when Russian Aleksandr Kuznetsov’s party flew in and hiked to 90 degrees North. Today, some 25,000 people aboard 81 ships have been to the North Pole and, it being the alleged residence of Santa Claus, Canada Post has even assigned it a post code, HOH OHO.

Our last explorations are to the ghostly, abandoned village of Tikhaya Bukhta, a former Soviet “weather station” (aka Cold War spook listening post), followed by a Zodiac excursion to the extraordinary Rubini Rock. We are greeted here by some 100,000 squalling guillemots and kittiwakes that nest among the giant rock’s basalt “organ pipe” formations. But their raucous welcome is also our farewell to the High Arctic as 50 Years of Victory turns for her home run down to Murmansk.

As we step ashore, the ship’s doctor hands me a certificate attesting that my plunge at the Pole was “an act of indubitable courage — as well as extraordinary, incomparable foolishness”. Probably so. 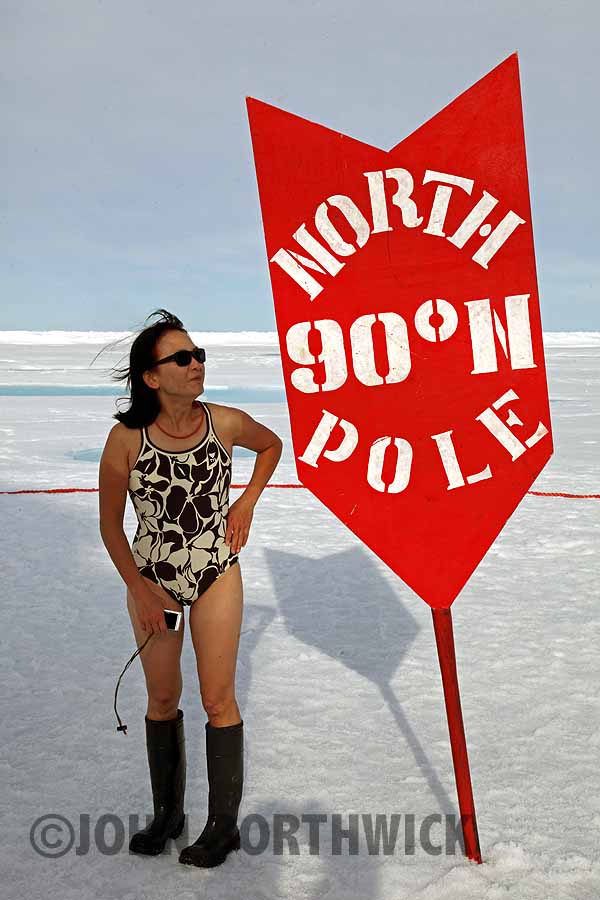 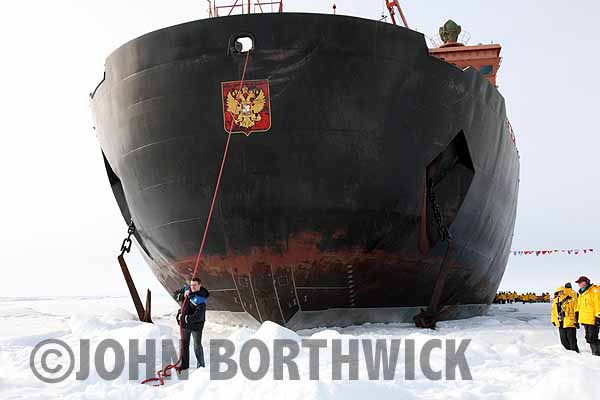 For information on 50 Years of Victory’s North Pole trip: http://www.peregrineadventures.com
Words and images ©2014 John Borthwick. May not be reproduced in any form without written permission.